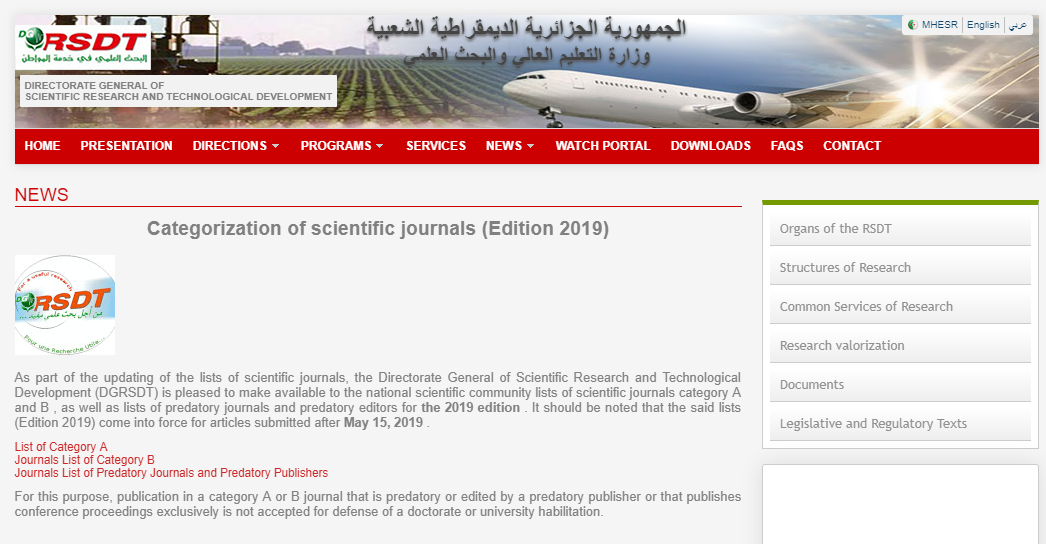 Predatory publishing can cause harm in all sorts of ways, but so can fighting it with the wrong ammunition. In this blog post, Simon Linacre looks at examples of how organizations have gone the wrong way about doing the right thing.

One of the perks – and also the pains – of working in marketing is that you have to spend time trawling through social media posts. It is painful because no matter how good your filters are, there is a huge amount of unnecessary, unearthly and unhealthy content being shared in absolute torrents. On the flip side, however, there are a few gems worth investigating further. Many of them prove to be rabbit holes, but nevertheless, the chase can be worthwhile.

Searching through some posts earlier this month I happened upon mention of an updated list of recommended and predatory journals. Obviously, this is our gig at Cabells so I was genuinely intrigued to find out more. It turns out that the Directorate General of Scientific Research and Technological Development (RSDT) in Algeria has produced three lists on its website – two of recommended journals for Algerian researchers in two subject categories, and one of predatory journals and publishers.

A cursory look at the predatory list shows that the first 100 or so journals match Beall’s archived list almost exactly. Futhermore, there is nowhere on the website that suggests how and why such a list exists, other than an open warning to authors who publish in one of the journals listed:

“To this effect, any publication in a journal in category A or B which is predatory or published by a predatory publisher, or that exclusively publishes conference proceedings, is not accepted for defense of a doctoral thesis or university tenure.” (own translation)

In other words, your academic career could be in trouble if you publish in a journal in the RSDT list.

The rights and wrongs, accuracies and inaccuracies of Beall’s list have been debated elsewhere, but it is fair to say that as Beall was trying to eradicate predatory publishing practices by highlighting them, some journals were missed while some publishers and their titles were perhaps unfairly identified as predatory. Now the list is over two years out of date, with one version being updated by no-one-knows-who. However, what are the consequences for Algerian academics – and authors from anywhere else who are judged by the same policy – of publishing in a journal?

Option 4 is obviously the best option, and Option 2 is a sad result for authors not doing their homework and de-risking their publishing strategy. But it seems there will be a large number of academics who make a valid choice (1) based on independent criteria who will fall foul of an erroneous list, or who think they are safe because a journal is not on the RSDT list but is predatory (3).

One of my colleagues at Cabells cross-referenced the RSDT list and the Cabells Blacklist, which now has over 11,595 journals reviewed and validated as predatory. The results show that due to a lack of crossover between the lists, many academics in Algeria, and potentially elsewhere, could be wrongly condemned or unwittingly publish in predatory journals:

As always, the moral of the story for authors is ‘research your research’ – fully utilize the skills you have gained as an academic by applying them to researching your submission decision and checking multiple sources of information. Failure to do so could mean serious problems, wherever you are.