Next week the annual celebration of peer review takes place, which despite being centuries old is still an integral part of scholarly communications. To show Cabells’ support of #PeerReviewWeek, Simon Linacre looks at why peer review deserves its week in the calendar and to survive for many years to come.

I was recently asked by Cabells’ partners Editage to upload a video to YouTube explaining how the general public benefited from peer review. This is a good question, because I very much doubt the general public is aware at all of what peer review is and how it impacts their day-to-day lives. But if you reflect for just a moment, it is clear it impacts almost everything, much of which is taken for granted on a day-to-day basis.

Take making a trip to the shops. A car is the result of thousands of experiments and validated peer review research over a century to come up with the safest and most efficient means of driving people and things from one place to another; each supermarket product has been health and safety tested; each purchase uses digital technology such as the barcode that has advanced through the years to enable fast and accurate purchasing; even the license plate recognition software that gives us a ticket when we stay too long in the car park will be a result of some peer reviewed research (although most people may struggle to describe that as a ‘benefit’).

So, we do all benefit from peer review, even if we do not appreciate it all the time. Does that prove the value of peer review? For some, it is still an inefficient system for scholarly communications, and over the years a number of platforms have sought to disrupt it. For example, PLoS has been hugely successful as a publishing platform where a ‘light touch peer review’ has taken place to enable large-scale, quick turnaround publishing. More recently, F1000 has developed a post-publication peer review platform where all reviews are visible and take place on almost all articles that are submitted. While these platforms have undoubtedly offered variety and author choice to scientific publishing processes, they have yet to change the game, particularly in social sciences where more in-depth peer review is required.

Perhaps real disruption will be seen to accommodate peer review rather than change it. This week’s announcement at the ALPSP Conference by Cactus Communications – part of the same organization as Editage – of an AI-powered platform that can allow authors to submit articles to be viewed by multiple journal editors may just change the way peer review works. Instead of the multiple submit-review-reject cycles authors have to endure, they can submit their article to a system that can check for hygiene factor quality characteristics and relevance to journals’ coverage, and match them with potentially interested editors who can offer the opportunity for the article to then be peer reviewed.

If it works across a good number of journals, one can see that from the perspective of authors, editors and publishers, it would be a much more satisfactory process than the traditional one that still endures. And a much quicker one to boot, which means that the general public should see the benefits of peer review all the more speedily.

Cabells is excited to have passed an independent COUNTER audit, the final step to being deemed fully compliant with the COUNTER Release 5 Code of Practice. 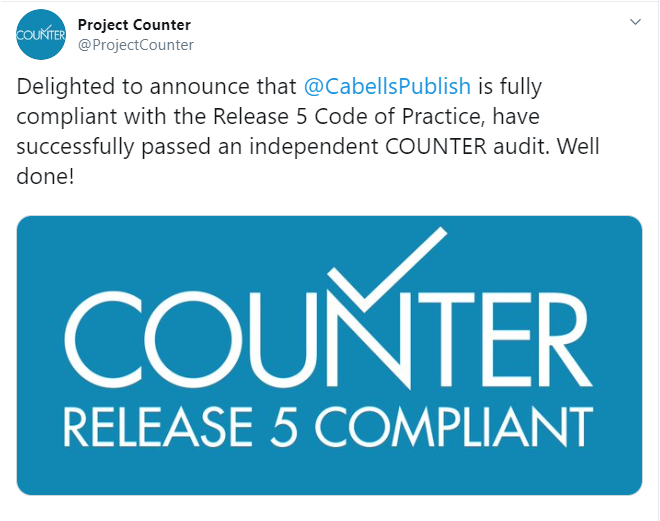 COUNTER (Counting Online Usage of NeTworked Electronic Resources) is a non-profit organization that helps libraries from around the world determine the value of electronic resources provided by different vendors by setting standards for the recording and reporting of usage stats in a consistent and compatible way. The COUNTER Code of Practice was developed with the assistance of library, publisher, and vendor members through working groups and outreach.

By implementing the Code of Practice, publishers and vendors support their library customers by providing statistics in a way that allows for meaningful analysis and cost comparison. This allows libraries to closely asses user activity, calculate cost-per-use data, and make informed purchasing and infrastructure planning decisions, ensuring limited funds are spent in the most efficient way possible.

For more information, check out the COUNTER website which includes their Registries of Compliance.