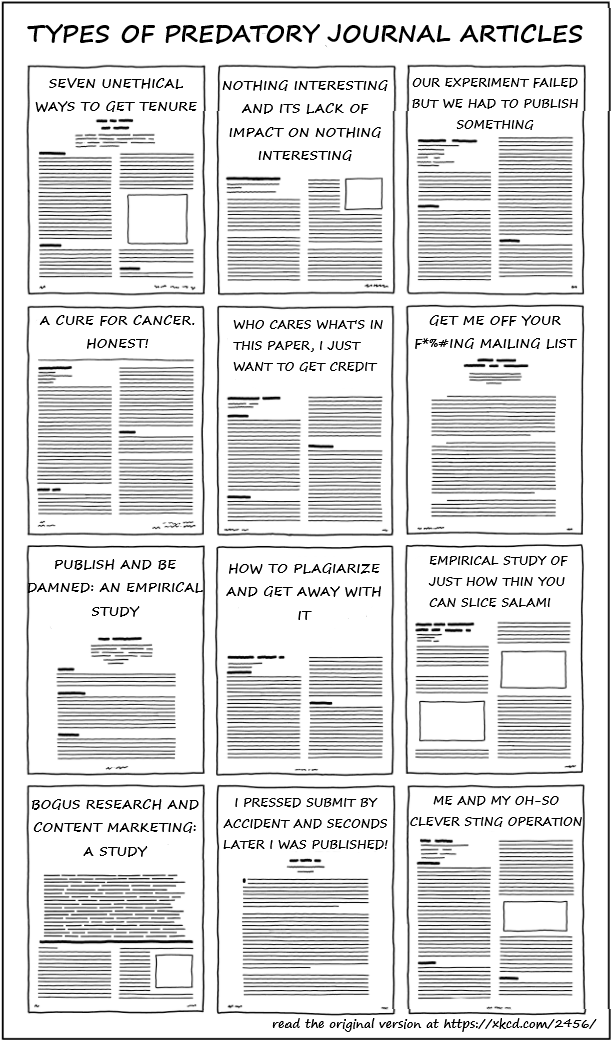 The latest meme to sweep Twitter in the last week has been a satirical look at typical journal articles. Simon Linacre introduces Cabells’ own take on the theme and reflects on the impact they can have on our shared conscience.

We all like memes, right? Those social media nuggets that we can all relate to and laugh at, a form of in-joke without having to be with a group of people, which under current circumstances has meant a kind of gold rush for this form of humor. Whether it is the boyfriend looking over his shoulder at another woman or the excerpt from the film Downfall with Hitler going berserk, the number of situations and news items that lend themselves to this form of parody is literally endless.

So, when the meme spotlight fell on our own corner of the scholarly publishing world, we couldn’t help but join in and adapt the scientific paper meme to predatory journals (see image). To be honest, it wasn’t too difficult to think of 12 journal titles that highlighted the problems predatory publishing causes, and a whole series of memes could easily be created to underscore the joke that is the predatory journal phenomenon.

It’s easy to spot the themes we chose to lampoon, although however much we become familiar with the predatory journal tropes, publications and new journals are emerging all the time, as the total number of journals listed in Cabells’ Predatory Reports hitting 14,500 this week testifies. Among the issues we put under the spotlight in the graphic are both the unethical and unaware authors publishing in predatory titles, how poor research or plagiarized content can easily be published, and some of the poor excuses those who end up publishing in dodgy journals have provided.

However, underneath the tomfoolery there is a serious point to be made. A recent op-ed in The Atlantic took the opportunity of highlighting not just the shared joy and geekiness of the scientific paper meme, but also the existential dread it spotlighted. As the article expertly points out, while academics recognize the hamster-in-a-wheel absurdity the meme represents, they cannot help but see themselves in the wheel, unable to stop running. For some, they will just shrug their shoulders and find the next piece of clickbait; for others, there is little consolation in the humor and plenty of angst to try and control to preserve their sanity.

When it comes to predatory journals, from a pure eyeballs perspective we can see that articles and social media posts about the often bizarre world of predatory publishing get the most traction, such as the fact that one predatory journal lists Yosemite Sam on the editorial board. And yet there is always a serious point behind these fun stories, which is that predatory journals can make an unholy mess of scientific research, causing millions of funding dollars to be wasted and allowing either junk or rank bad science to contaminate legitimate published research. This is the real punchline and it rings pretty hollowly sometimes.