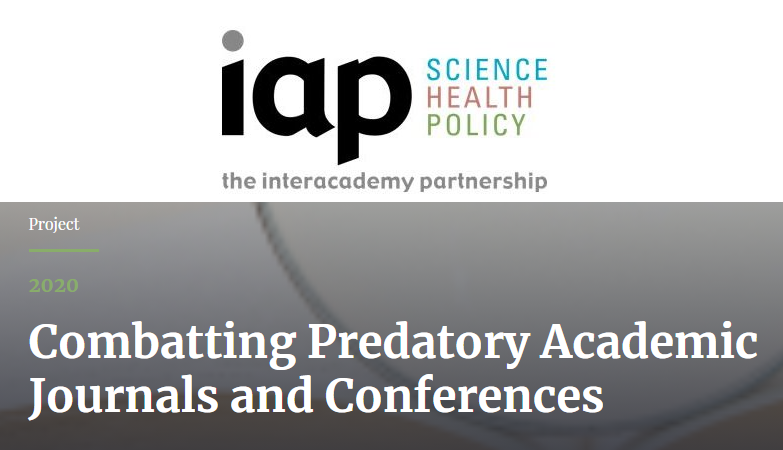 The rise and rise of predatory journals and conferences

Predatory academic journals and, even more so, predatory conferences have been given surprisingly little attention in academic circles, despite their rapid growth and sophistication in recent years.  Juxtaposed with the pervasive “publish or perish” research assessment culture, where quantity trumps quality, the research community risks sleepwalking into a perfect storm.  Predatory academic practices are one manifestation of a surge in online scams and deceit that are deluging many sectors, fuelled further by changes in (post-) pandemic lifestyles, but their impact on the knowledge economy, research enterprise, and public policy is potentially profound.

The InterAcademy Partnership (IAP) – the global network of over 140 academies of science, engineering and medicine – is leading an international project “Combatting predatory journals and conferences” which seeks to better understand the growing menace of these practices, gauge their extent and impact, what drives them and what actions are required to curb them.  With the number of predatory journals now estimated to be at least 14,500 (Cabells) and predatory conferences believed to outnumber legitimate ones (THES), this project is imperative and our recent survey of researchers all over the world is illuminating.

Conducted in November-December 2020, the survey gives concerning insight into the extent and impact of predatory practices across the world.  Based on the 1800+ respondents, two headlines are particularly striking:

1. Over 80% of respondents perceived predatory practices to be a serious problem or on the rise in their country.

2. At least a quarter of respondents had either published in a predatory journal, participated in a predatory conference, or did not know if they had.  Reasons cited for this included a lack of awareness of such scams and encouragement by their peers. Indeed, there is anecdotal evidence to suggest that the use of predatory journals and conferences is embedded, or at least tolerated, in some institutions/networks.

Contrary to some studies citing that early career researchers are especially vulnerable, we found no correlation between a researcher’s career stage, or their discipline, with their likelihood to publish in a predatory journal or participate in a predatory conference.  However, there is a small correlation with the economic status of the country in which they work, with those in lower- and middle-income countries more likely to participate or publish than those in high-income countries. If left unchecked, the research gap between higher- and lower-income countries risks widening. Putting definitive guidance on predatory journals behind paywalls, whilst sometimes unavoidable, risks exacerbating this further.

A challenge for such essential services, whether paywalled or not, is how to distinguish fraudulent, deceitful journals from low quality but well-intentioned and legitimate ones. Whilst bringing the clarity researchers crave, journal safelists and watchlists force an in or out binary decision that is increasingly inadequate and unfair.  In reality, there is a spectrum of fast-evolving and highly nuanced publishing practices that makes Cabell’s and its counterparts’ work very difficult. IAP is currently exploring a subset of Cabell’s-listed predatory journals using internet scraping and spidering techniques for data on predatory publishing.

Our project report, anticipated by early 2022, will include recommendations for all key stakeholder communities – researchers, research funders, publishers, academies and universities, libraries, and indexing services. With IAP as a conduit to academies and research communities throughout the world, we will focus on awareness-raising, training, and mentoring resources, and mobilising governments, multilateral and intergovernmental organisations.