With 2022 promising to be either ‘back to normal,’ the ‘new normal,’ or ‘near normal,’ what does ‘normal’ actually look like in scholarly communications? Simon Linacre reports from two recent business school conferences on what to expect – and what should happen – in the next 12 months.

It first hit me when I sat down on the train to London for my first conference in nearly two years. The train was on time, but there were no seat reservations operational; some people were wearing masks (as advised in the UK), but some people weren’t (it’s not now mandatory); a lot of people were attending the event, but the interesting people I wanted to meet were dialing in for their talks.

Welcome to the new normal for scholarly communications.

Comparing events now to events in 2019 is a little like comparing Christmas or other festivals to 10 or 20 years ago. They feel different and should be better, but we can’t help feeling wistful for when things seemed a little simpler. Following my experience in the last week, academic conferences will be enhanced in terms of who they can get to speak at them and the variety of talks and activities, but they may be a little less satisfying as people dial in with the inevitable technical problems, and in-person meetings are diluted by absences.

The fact that such events are impacted in this way is actually a good thing, as in part it shows a willingness for academics to bite the bullet and stay away from events due to a need to cut their carbon emissions. This topic was very much present in the two conferences I have recently attended, but in slightly different ways. At the Chartered Association of Business Schools (Chartered ABS) event in London, the issue of sustainability was prominent, with a keynote panel discussion and breakout session dedicated to the topic and how business schools should respond. Among the hand-wringing, however, there was little in the way of answers. A key point was made by one business school representative who said to help meet emissions targets the school needed to half its carbon footprint, but the school’s strategic plan was to double the number of students. With student travel responsible for almost half the school’s footprint, it was difficult to see how it could meet both growth and emissions targets.

The second event was the Global Business School Network’s GBSN Beyond annual event which had decided to remain an online event due to its international audience and Covid issues. Sustainability was also a key element in the event’s agenda, with talks on issues such as community impact and corporate human rights, all supported by a virtual reality-inspired online hub for delegates (see below).

It was at this event two years ago that the collaboration between Saint Joseph’s University and Cabells began that has resulted in the development of the SDG Impact Intensity rating. I was really pleased to share an update on the project at the conference it started at this year, along with ideas for future development, but sad I couldn’t meet people in person. However, I was also glad I wasn’t burning up resources unnecessarily just to propel me somewhere I didn’t need to be. Maybe the new normal should be ‘new normals’, as whatever we do now there are multiple, often contradictory, emotions and feelings in play.

The great and the good of world business, finance, and politics met this week in the small Swiss resort of Davos, pledging to enact change and make a real difference to how the world works. But what is so different this time? Simon Linacre reports on his first visit to the World Economic Forum, and how business schools can play a pivotal role in changing the system.

It was 50 years ago when Dr. Klaus Schwab first invited business leaders to the small mountain retreat known as Davos, and since then it has grown into THE conference at which to see and be seen. Just over 3,000 lucky individuals are invited, with even fewer gaining the “access all areas” accreditation that gets you into sessions with the likes of Donald Trump, Greta Thunberg, or Prince Charles. The whole performance is surreal, with limousines whisking delegates the shortest of distances through the traffic-clogged streets, and slightly bewildered-looking skiers and snowboarders look on.

From start to finish, there was a noticeable tension in the air. Security is high level, with airport-standard checks at hotels and conference centers and armed guards at every turn. There is also conflict around the critical issue of climate change – while President Trump declares the issue to be exaggerated, a huge sign has been carved into the snow for all those arriving by helicopter and train to see: ‘ACT ON CLIMATE’:

There also seems to be a conflict in how to deal with climate change and other major issues facing business and management today, and these can be broadly put into two camps. One believes that compromise is the answer, and big business seems to have largely chosen this path in Davos, with everyone seeking to state their environmental credentials or how they are pursuing one of the key phrases of the event, ‘stakeholder capitalism’. An approach first espoused by Dr. Straub fully 50 years earlier at the inaugural event.

The other camp believes that the answer can only depend on change. And not just change, but radical change. An example of this was the launch of the Positive Impact Rating (PIR) in Davos, which is an attempt to rate business schools for students and by students. Over 3,000 of them were surveyed – the results can be seen at www.PositiveImpactRating.org – where 30 business schools were rated as either ‘progressing’ (Level 3) or ‘transforming’ (Level 4) in terms of societal responsibility and impact.  Many of the business school deans and business leaders present were in favor of such an approach, believing that if business schools are to have any credibility in a society where sustainable development goals (SDGs), climate change, and social responsibility play an increasingly important role, the time to change and act is now. PIR is part of a wave of organizations such as Corporate Knights, the UN Global Compact and PRME that recognize and promote progressive business and education practices that are now becoming mainstream.

This approach is not without its critics, with some existing rating providers and business school leaders cautioning against too much change lest consistency and quality be ignored completely. These voices seem increasingly isolated and anachronistic, however, and there was a feeling that with a deadline of 2030 being set as the deadline for turning things around, business schools have to decide now whether they choose the path of compromise or change. If they are to remain relevant, it seems the latter has to be the right direction to take.

Business schools and the MBAs they teach have been reinvented on a regular basis almost since they began life early in the 20th century. However, Simon Linacre suggests that as the Global Business School Network meets for its annual conference in Lisbon this week, calls for a new approach might just be followed through

Another day, another business school conference. As a veteran of at least a dozen or so such events, then it is hard not to be a little cynical when reading about the conference theme set out on the website. Business schools need to change? Check. New programs being promoted? Check. Social running club at 7am on the first morning? Oh, that’s actually quite different.

The Global Business School Network (GBSN) is quite different. With a mission to “partner with business schools, industry, foundations, and aid agencies to improve access to quality, locally relevant management education for the developing world”, it’s focus is very much on a sustainable future rather than on shiny new MBAs for the privileged few who can afford them. As such, the theme of ‘Measuring the Impact of Business Schools’ is more than simply an on-trend marketing slogan, but rather a statement of purpose.

But despite its undoubted sincerity, can such an objective be achieved? The reason it just might is that it is very much aligned with a changing mood in business education. A recent report in The Economist referred to the development of a ‘New Capitalism’, where greed is no longer good and sustainability the imperative rather than simply growth. Evidence can be seen not just in the numerous business school deans being quoted in the piece, but in wider moves such as the New Zealand Prime Minister Jacinda Ardern’s recent pivot to adopt the Happiness Index as a metric for national development. The times they are a-changin’, as someone once said.

Ultimately, such changes may be as much to do with the bottom line rather than more altruistic motives. Recruitment in the US to MBAs is down, with students apparently becoming more demanding when it comes to what is being taught, with a focus on sustainability and wider impact at the top of the list. The mantra ‘doing well by doing good’ is not a new one, but perhaps we are entering an era where that shifts from just another strapline to becoming a true aphorism for change.

Cabells is supporting the GBSN event by hosting a session on research Impact for the Developing World. There are no preconceived ideas or solutions, just that the existing notions of impact are changing, and that each school needs to be laser-focused on investing in impact in the most relevant way for its own mission and purpose. Whatever business schools can therefore learn about measuring their impact will mean that the conference’s theme actually means something for once.

This week, Cabells is fortunate enough to connect with colleagues and friends, new and old, across the globe in Lisbon, Portugal at the GBSN 2019 Annual Conference, and in Charleston, South Carolina at the annual Charleston Conference. We relish these opportunities to share our experiences and learn from others, and both conference agendas feature industry leaders hosting impactful sessions covering myriad thought-provoking topics. At the GBSN conference in Lisbon, Simon Linacre, Cabells Director of International Marketing and Development, is co-leading the workshop, “Research Impact for the Developing World” which explores ideas to make research more impactful and relevant in local contexts. At the heart of the matter is the notion that unless the global business community is more thoughtful and proactive about the development of research models, opportunities for positively impacting business and management in the growth markets of the future will be lost. We know all in attendance will benefit from Simon’s insights and leadership in working through this important topic. 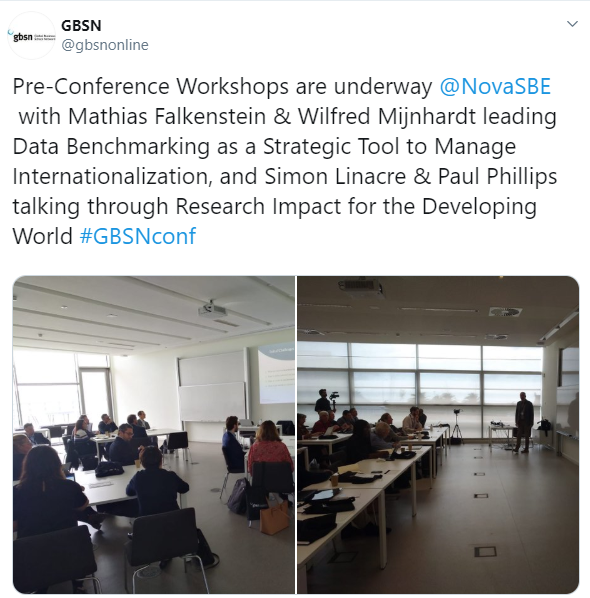 At the Charleston Conference, a lively and eventful day at the vendor showcase on Tuesday was enjoyed by all and our team was reminded once again how wonderful it is to be a part of the scholarly community. We never take for granted how fortunate we are to have the opportunity to share, learn, and laugh with fellow attendees.

We are always excited to pass along news on the projects we are working on, learn about what we might expect down the road, and consider areas we should focus on going forward. Hearing what is on the collective mind of academia and how we can help move the community forward is what keeps us going. And things are just getting started! With so many important and interesting sessions on the agenda in Charleston, our only regret is that we can’t attend them all!